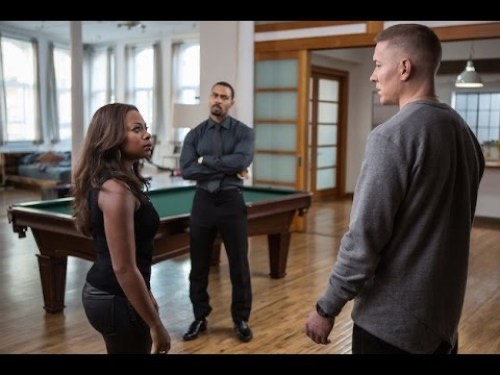 Executive Producer 50 Cent had no idea what was to come when his t.v series Power debuted June 7, 2014. We’ve seen plenty of movies about drug dealing, hustling, even a few television shows like Breaking Bad, another great instant tv series classic, but have we seen a fictional tv series depicting the lives of drug dealers and everyone involved with this type of detail?

With such strong character personalities such as James (Ghost) St. patrick the hustler, played by Omari Hardwick, who is very smart, manipulative, calculated and strategic, who happens to want to go legit and thrive in the night club entertaining business.

His team, including his wife Tasha St. Patrick, played by Naturi Naughton, are all against him going legit. Tasha wants Ghost to do what he does best, and his main partner Tommy played by Joseph Sikora, is the same exact way. Tommy is glued to the fast money, the streets, and is a real killer in the show. Between Ghost and Tasha’s children, his affair with District Attorney Angela Valdez, played by Lela Loren, who happens to be his high school sweetheart and happen to be looking to take down the very organization Ghost runs, without knowing the man she is sleeping with is the one she is trying to take down!

With these characters alone, makes for a great storyline, and a bunch of different stories, inside of one story which is the entire show.

Power has expanded and now has a plethora of spin off shows such as Ghost Power Book ll, Raising Kanan, A character played by 50 Cent himself, which are both available to watch on the Starz app. Kanan is a character from the original cast of the first Power series, who is a friend/foe of Ghost, Tasha and Tommy.

Kanan played a major role in Ghost’s rise to the top in the drug game, and his story will be told in Raising Kanan. Rumors of another spinoff show, picking up where the original Power series left off following

Tommy and his new Journey, Power is looking to corner the market, have a series of its brand on all year long. From money, drugs, murder, betrayal, infidelity, loyalty, love, hate, envy, revenge, growth, corruption in politics, great character development, and plenty of unexpected twists and turns, Power offers a string of shows that will definitely keep us all entertained as long as they keep producing more seasons.

50 Cent not only had his hands in making a great entertaining show as the Executive producer, but because of this show many of the actors and actresses will get a lot of future opportunities in film.

Some made Power their coming out parties such as Michael Rainey Jr., who played Tariq St Patrick the son of James and Tasha St. Patrick, and others such as Mary J. Blidge and Method Man who both had very successful music careers, a chance to re-invent themselves. Mary plays Monet Tejada, wife of drug lord Lorenzo Tejada, as she is running the business on the outside while take orders from him while he is locked up on the inside.

While Method Man plays a defense attorney by the name of Davis MacLean and really shows off his acting ability proving to the world he belongs on the big screen. Power checks off all of the boxes for the type of show it is. If you haven’t seen it, or have never heard of it, you are for surely missing out on a treat.