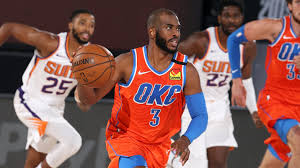 The first blockbuster move of the NBA 2020 off season involves Chris Paul being shipped to the Phoenix Suns from the Oklahoma City Thunder.

The Hall Of Fame guard now creates on of the deadliest back-courts in the league joining Super Star talent Devin Booker.

After failing to reach the NBA finals with The Lob-City Clipper’s that featured CP3, Blake Griffin, and Deandre Jordan, CP3 was shipped out to Houston where he joined Scoring Champion James Harden.

No matter where the CP3 landed the Golden State Warriors seemed to be his kryptonite as he had the Rockets one win away from the NBA Finals before going down with a hamstring injury.

After clashing with James Harden Chris was left for dead being traded to the OKC thunder. CP3 shocked the world with what was arguably his best season willing the Thunder to a 6th seed in the Stacked Western conference.

Phoenix his hoping he can recapture that magic as he is poised to step in as the undisbuted leader and voice on this roaster.

The Los Angeles Lakers were interested in the H.O.F. guard but CP3 had no interest in ring chasing. He would much rather join a roaster where he is most needed. If that was the case, then he is right where he need’s to be.

Covid-19 has permanently changed our world. The disease has made us make adjustments in how we eat, shop, do business, and every other major decision involving public interaction. This deadly disease has proven to...

Lavar Ball predicted just a few years ago that all 3 of his sons would be playing in the NBA, at the same time, on the same team. Now it didn’t quite work out...